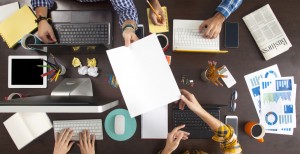 The single, biggest failure of leadership is to approach organizational change as if it was a technical problem rather than a human adaptive challenge.
Paraphrased from Ron Heifetz — Leadership without Easy Answers

I agree with Ron Heifetz. Organizations are not good at adjusting, adapting, and re-aligning with a changing market. Typically, the larger they get, the more difficult to change. This is partly because change requires the senior executive team to not only adjust and adapt their strategies, policies, systems, etc.(the technical side of change); but to simultaneously change their own behaviour. These behavioural changes are usually required at both an individual leadership level as well as the team dynamics level. This is the adaptive challenge that Heifetz is talking about. Organizational change starts with individual behaviour change. This adaptive work is often avoided and unaddressed. Personal change is really hard, as it requires those leaders to be open and vulnerable. They need to listen deeply to the perception others have of them and acknowledge that their mental models, deeply ingrained habits, assumptions, and leadership behaviours might be outdated and inadequate for future challenges they and their organization face.

When I was a young teenager, I played quarterback for a house league football team. I learned how to throw a ball quite well and we won the city championship. Forty years later, I took up fly fishing, but my fly cast sucked. I was casting a fly rod like I used to throw a football: loose wrist as opposed to stiff wrist. I first had to become aware of my outdated habit, through a friend who was coaching me, and then unlearn that old skill that I was still quite proud of, but proved no longer useful. Only then was I able to learn the new skill of casting a fly rod.

Before we can learn and utilize new, more useful, leadership behaviours, there are two things to do. We have to uncover then unlearn the beliefs, assumptions, and habits that inform our current learned behaviours—ways of thinking that may have worn out their usefulness. When leaders reach the executive suite their skills and behaviour that got them there may not be the same ones that will keep them there. At a talent review meeting I facilitated with a CEO client and his senior team; we were discussing the merits of the management talent pool a couple of levels below the senior team. At one point the CEO blushed, laughed sheepishly, and stated, “Unbelievable! I am seeing for the first time, that the characteristics we used to promote our younger people for, we are now thinking of firing them — for over-emphasizing those same characteristics.” Their historical strengths had become their current weaknesses.

I am working with an executive who, when in discussions with his team, is trying to become a better listener while creating more dialogue. Before he can learn how to do that and apply it in a sustainable way, he discovered that he had to unlearn his belief that as the leader he was expected to have and express the right answers to the team’s and organization’s problems. In the role of the expert, he didn’t need to listen; just come up with the answers and delegate execution to his subordinate team. This worked earlier in his management career, but no longer seemed to be effective working at a senior level with other senior executives. At this senior level, he needed a high-performing team to help him solve the complex problems they faced. So, as a senior team leader, he realized that he needed to develop a new habit: listening and engaging, while building trust in order to bring out the best abilities of his team. He needed to enable a very different dynamic with his team than he had in the past.

In this short paper, I would like to give you a taste of how you can advance your own personal and team executive development, along with your organization’s adaptive solutions, beyond well-intentioned but ineffectual New Year’s resolutions.

Technical problems are usually fairly straight forward and require a particular kind of knowledge, expertise and methodology. Their solutions are usually composed of a prescribed pathway to the desired outcome. As leaders, you may not have the skilled knowledge to apply the new techniques and process, but you know you can learn them, or where in others you can find them. And, you can learn or find them without having to make personal changes. You can solve a technical problem without any challenge to your current sense of who you are and how you should act.

A recent example would be my involvement in helping a senior team introduce and implement a better performance management system in its organization. As most of us have experienced, these new systems rarely deliver on the promise. Why? Because the adaptive challenge or personal behaviour or mindset change required in parallel with the technical changes often go unaddressed. There is no prescribed pathway for personal behaviour change. Personal change initiatives have unknown outcomes. Successful outcomes aren’t guaranteed, as the path to success is often unknown, as well as the outcomes. Personal change requires personal openness, vulnerability, the ability to listen and take in feedback. It also requires active experimentation of new behaviours, which inevitably lead to awkwardness and some failure.

In this particular case, to get the desired results with the new performance management system, the senior executive team would have to first model some new behaviour. This new behaviour would require those executives to experiment in the kinds of performance evaluation conversations they wanted all managers to engage in. Failure is possible when it comes to an adaptive challenge. Leaders are confident of success with the technical side of a system change. However in my experience, they are not confident with the adaptive challenges that require their own and others’ behaviour change—the behaviour change that will lead the successful and sustainable execution of the new process. In order to change the culture of the company, the senior team will have to model very different individual and collective behaviours for the new performance management system to get real traction.

The above example plays out in a similar manner when executives or executive teams are committing to leadership and team development plans. Such plans include their individual and collective commitments to action, designed to improve their functioning as a team and individual contributors to that team. Think of a development plan as having one foot on the gas. It is a plan for moving forward, growing, getting better.

As a team, maybe it was “we need to get better at challenging and advising each other in our team meetings with the best interests of the whole enterprise in mind.” Great goal! Now the team has a foot on the gas. We have another great New Year’s resolution in the making, where the effort likely fizzles out by February. Why? Because the team members likely have one foot on the brake as well, but don’t see that foot on the brake as clearly as the foot on the gas. Even if they see it, they may be very reluctant to talk about it because they don’t know how to address it, and therefore can’t be guaranteed the successful outcome of releasing it. Perhaps the foot on the brake is, “I have an unconscious goal never to be seen as inadequate in front of my colleagues and boss.” This is not a goal they have, but a goal that has them. In other words they likely aren’t aware that it is operating below consciousness to maintain an outdated mindset around always looking good, powerful, or right in front of peers, bosses and subordinates. They likely don’t see that this goal that has them drives behaviours that are blocking their team development goal.

On the individual level, maybe my development goal or foot on the gas is to “do less micromanaging of my team and trust that they will perform in the manner that we have agreed to.” Having settled on this improvement goal, I develop my to-do list for what I need to do to make progress on my goal. The technical solution is in place. I have my New Year’s resolution. I apply new behaviour with my team for about a month and then as soon as I am stressed out about our function, I go back to micromanaging. Why? Because, like the team situation, I have one foot on the brake as well, and I can’t see that foot which is preventing me from accomplishing my improvement goal. That foot on the brake may be something like, “I have a hidden commitment never to being seen as uninformed or having errors in my work outputs in front of my boss and colleagues.” Again, this is a goal which has me because it is operating at the unconscious level; it’s not a goal I consciously have.

Releasing the brake through the courage to be vulnerable, to listen attentively, and to unlearn outdated assumptions

Executive development plans (our foot on the gas) will continue to lack power and traction until we can see how we also have another foot on the brake. Learning new behaviour requires unlearning old mindsets and the behaviours informed by those mindsets. The personal and team development goals we come up with are clear. We have them in the sense that they are out there on the table in front of us. They are our technical solutions to a developmental problem. What we can’t see so clearly are the hidden, competing goals that have us. See the two examples above. Courageous conversations with ourselves and with each other on the senior team need to occur before we can be successful with our personal or team adaptive challenges and improvement goals. In other words, there needs to be a willingness and group norm among the senior leadership to surface those hidden commitments that have us. Acknowledging and putting those hidden commitments on the table requires us to see and unlearn those outdated perspectives, habits, and assumptions that drive our current behavior. If we don’t do this, we will inadvertently keep one foot on the brake.

We all have a set of beliefs, habits, assumptions, and behaviours that have led to our current success in the world or organization where we operate. This self-image is how we define ourselves. It is who we think we are. We protect and defend this self-image through having a foot on the brake that protects and immunizes us from personal or team behavioural change and development. Until we have the insight and courage to engage in this kind of development process—where we work with both the foot on the gas and the foot on the brake—we will have limited success with the ongoing leadership development required to retool and realign their organizations.

Previous post: Developing Character Habits in our Leaders: Are we addressing a Sin of Omission or a Sin of Commission?

Next post: Mind the Gap: A better approach to personal and team development