Helping executive leadership teams get results by talking about what matters

A CEO invited me to talk with him about how best to leverage his senior team so that it could help him lead the execution of a new strategy. Our discussion eventually settled on one crucial component: meetings.

“Our meeting behaviour is a waste of the expensive talent we have,” said the CEO. What he had realized he condoned was the senior team’s habit of updating and talking at each other about how they were doing relative to plan. “What we need is more consistent candid conversations about whether the plan is still relevant,” he said. “Especially a plan we created a year ago. Our situation changes daily, and in my view, these changes need to be better acknowledged and addressed in ongoing team dialogue and for us to agree on actions required to adjust our future plan.”

This issue is part of a bigger problem left over from a time when businesses existed in a more stable, predictable environment with a different set of learned management behaviours. Today, executive teams spend too much time building granular pictures of the future and how to get there (generating strategic and operational planning documents), often driven by their Boards. Not enough time is spent, however, on addressing and understanding the forces acting on the business today, and the consequences of those forces for moving toward a desired future.

My consulting and coaching practice focuses on building senior leaders’ willingness and ability to critically understand their current experience in the context of advancing toward their future goals. This focus acknowledges that the future emerges through the continued lived experience of organizational members. That lived experience needs to inform their ongoing social interaction and candid conversations with each other, their individual teams, and their external stakeholders.

By lived experience, I am referring to the group’s commitment to paying attention to what’s going on right now, both internally with the workforce and externally with the various stakeholders that impact their business and plan. This commitment and competence requires them to be interacting quickly and candidly about the impact of that lived experience, including what changes need to be made in order to realign future plans with emerging requirements.

Being Present Is Required To Build The Future
We can’t really know the future in any kind of detailed way. There are too many unpredictable forces that will emerge to throw us (appropriately!) off course. I say “appropriately” because these unknowns coming into the system may turn out to be strategic opportunities in disguise.

I worked with a mining company that operated in a country that wouldn’t give them permission to smelt the concentrate. They had to ship the concentrate to a smelter on another continent at great expense. Much of their ongoing effort and resources were spent on a “plan” to get permission from the local government, where they operated, to build a smelter. Suddenly the off-shore smelter came up for sale, and the senior team very quickly turned their problem into an opportunity. They bought the smelter. When the suggestion was initially and timidly made by one of the executives: “Why don’t we buy it?” his peers looked at him like he had two heads. Not only did they acquire a secure source to process their ore, but they also found another line of business to smelt concentrate for other mining companies.

Powerfully managing both planned and emergent change requires a clear ability to make sense of the everyday, every day. Ironically, staying present is required to build the future. This management tendency – to be overly fixated on the pre-determined plan, rather than the current reality presenting itself from day to day – is nicely captured by the Spanish poet, Antonio Machado.

Here is a more recent example of how I have seen this play out with another one of my clients.

In this situation involving a large insurance company selling group benefits, there were lots of early signs of smaller, non-traditional competitors coming into their space and capturing in novel ways small percentages of their market share. This company was by far and away the leader in this business, and its management was slightly irritated by these competitors, yet it remained unwilling and unable to really address, change course and reprioritize its five-year plan to deal with these new rivals. The senior executives were very successful getting business the traditional way. They knew something had to change but didn’t know how to make the changes. When they finally and formally talked about these threats and what to do about them, they had already lost significant market share. Only later were they able to acknowledge that their denial was rooted in fear of the unfamiliar and the possibility of failing.

Executive teams, when together, tend to neglect important and often difficult conversations about what really matters in the present moment. Addressing the current resourcing and capability issues may also require re-designing the structure to better enable the changing priorities. If senior executives are overly identified with their individual functions, rather than the whole enterprise, changing the structure and reallocating resources often leads to turf battles, resulting in winners and losers.

You Can’t Get There Directly From Here
The management work from strategy development to execution is not a linear, sequential, uni-directional process. It plays itself out through understanding how the current situation influences – that is, creating the conditions for, or not – some future ideal. The future is really about the present in this way of thinking. The essential work of leadership is to manage this dynamic, iterative, process and gap between the present reality and future ideal state.

“Managing the gap” has been well illustrated in the following model originally developed by Robert Fritz and outlined in his 1989 book, The Path of Least Resistance: Learning to Become the Creative Force in Your Own Life. 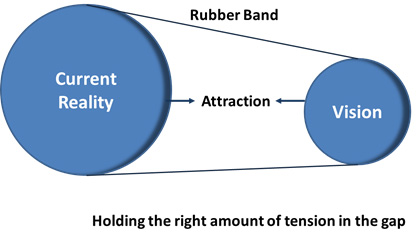 When this model was first introduced by Fritz, organizations and the environments they operated in were thought to be more stable and predictable with a linear cause-and-effect relationship between strategy and results. It was also thought that vision functioned to help pull the current reality toward the designed future.

In the complexity of the modern business environment, the dynamics of the gap are less predictable and less linear. Signals and responses to changes modify the designed future destination. An example of a signal may be the new and small competitors that come into your organizational space; or another signal might be your observation of dysfunctional behaviour occurring within the executive team; or perhaps the silo behaviour across the departments or functions at the next management level down. These signals are too often denied by the executive team, as they may lack both the skills and the courage to address them candidly with each other.

An elevator discussion I overheard while working at the insurance company I referenced earlier was very telling. Two managers were discussing how there was no shortage of good ideas in the organization, but the problem was there was no place for those ideas to land and get developed. When the senior team finally got serious about dealing with the non-traditional competitors, one of the strategies was to develop a more innovative work climate. Cross-functional project teams were put together to turn “new ideas” into a process they called, “launching small boats.” Some of these small boats sank and others became part of the fabric of the organization. The senior team had essentially empowered the next management level down to work together and come up with new ideas for regaining their market share.

Therefore the journey from current reality to vision is not like laying down track and then taking a direct train ride, but more like a sailboat journey where the crew is constantly tacking (e.g. cross-functional teams, “launching small boats”) on the way to an increasingly, better defined future ideal or safe harbour. “You make the path by walking. The path is nothing more than your tracks.”

It is less important to think in terms of “closing the gap” and more relevant to understand the future possibilities emerging within the gap. This is the work of leadership: to manage the creative tension within the gap. Effective senior teams have courageous conversations—conversations that really matter, about now and about what needs to happen next, then next after that. In the case of the insurance company, the courageous conversations began with the senior team acknowledging that they were not incentivized, or accountable, individually to deal with these new competitors, and even if they were, they did not know how to make the right changes in order to deal with them. Senior leaders that form effective teams are not afraid of conversations in which they are changed personally through new learnings and insights. That behavioral shift – in often very subtle but sometimes quite radically ways – impacts the shape of the designed future. In part 2 of this article, I’ll delve into how to actually have these conversations that matter.

Addressing The Future Through The Power Of The Present—An Executive Competency
I am not saying that conversations about the future are less important than ones about the present. Leading strategic change or the execution of strategy all starts with the need to put a stake in the ground about what you want in the future. Establishing vision, goals and first steps are important conversations to have. However, plans need to be “held lightly” and accorded a sense of a starting point rather than the end game.

The process of conversing about how the present is informing possible futures is more important than the ultimate planning document. Having those conversations need to remain a priority throughout planning cycles and updates. Process and conversation about the future need to be grounded in real, candid conversations about the present. “There is no path. You make the path by walking.”

My key point here is that leading the execution of strategy requires an attentive focus on the “present,” which includes being honest about yourself, your peers, your subordinate teams, and the external signals coming into your world.

When signals come into your system, even if you wish they hadn’t, and you wish you could ignore them, the executive team needs an agreed upon behavioural norm and accountability to each other, to call those signals out and deal with them.

Many of these signals will require strategic and behavioural adjustments. In my opinion, this is what is required to effectively lead change—it’s the courage to look in the mirror as a team, as a leadership starting point, and ask: “What do we need to change about ourselves and our actions now to create different future possibilities?” Then look into the mirror again as an individual leader asking the same question. This is the path you make by walking. How to actually walk that path will be addressed in Part 2 of this paper: Senior Executive Teams: Leading in Complex, Fast Environments.