I am often puzzled in both my own case, and with those I work with, why what we say we want to change is so darn hard to do. We witness in befuddlement all these “dysfunctional behaviours” that we and others engage in that undermine espoused goals. It doesn’t make sense!

Or does it? It wasn’t until I realized that these dysfunctional behaviours make perfect sense, from a deeper perspective or motive to self-protect. It became clearer to me, why change is so hard, and what to do, in order to make it easier. 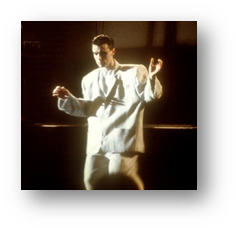 If you were a rock music fan during the 80s, the ironic phrase, “stop making sense” would be familiar to you.  It was the name of a fantastic Talking Heads tour and a subsequent documentary movie of the same tour, directed by Jonathan Demme.

This seemingly illogical phrase, stop making sense, resurfaced in me recently.  I was thinking about the difficulty we have in making and sustaining significant behaviour change.  To be successful with some of our improvement goals (e.g. I need to get better at delegating), there are times when we need to actually… stop making sense.  Some behaviours we engage in appear to make no sense (e.g. micromanaging), because those behaviours obviously undermine the improvement goal of getting better at delegation.  We say we want to get better at delegating, but when under stress, we usually return to micromanaging.  It doesn’t make sense….or does it?

From another perspective these undermining behaviours make perfect sense.  This other perspective reflects our human need for personal safety or self-protection.  These seemingly dysfunctional behaviours or specifically the behaviours we refer to as micromanagement, are not at all dysfunctional, as they serve to protect a hidden image or identity we may have.  In this particular case that identity may be associated with an unconscious belief that we must always be in control, must always be right, or that nobody can do this work as well as we can.  Those beliefs and assumptions are likely driving those undermining behaviours that conflict with our goal.  Yes, those behaviours may make perfect sense from this alternative perspective of keeping ourselves safe.  However we can uncover and overthrow what Lahey and Kegan call, the personal “immunity to change system”.  Once we do that, we can choose to “stop making sense” and make headway on our goal.

Let me give you a typical example of how this plays out.  I work with executives who are committed to getting better at spending more time on strategic and development issues through empowering their team to make more of the operational decisions.  These executives need and want to let go of work they know they are holding too close to their chest.  They need to get out of the weeds, so they can spend the requisite time on the balcony, appropriately doing their team leadership work that they currently don’t have time for.  They may have had this goal for a while, and have had brief periods of success with it, but then find they slip back into the old behaviours that ultimately undermine their goal of delegating operational work and doing their leadership work.

In my view, most of our corporate goal setting processes are like setting New Year’s resolutions, with the naïve hope that we will accomplish these goals through sheer willpower, or applying a heavy foot to the gas.  We know what happens to most of our New Year’s Resolutions. 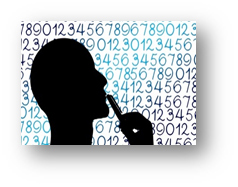 When I ask these executives what they are doing that is getting in the way of success with their goal, they sheepishly give me a list of things that don’t make sense from the goal’s perspective.  This includes doing work that their subordinates could do themselves, being overly prescriptive about the expectations that they have and give, as well as solving team problems themselves, rather than facilitating the problem solving process with their team.  They also admit to spending far too little time with their team on defining strategic context and overall strategic priorities.  They say and believe they want to spend more time on the balcony, but often their behaviours, especially when they are under stress (concerned about safety and self-protection) they revert back to the familiar work of the weeds.

You Got a Foot on the Brake

They really DO want and need to make this transition in leadership behaviour.  They are swamped and can’t find the time to define and hold the big picture and lead that big picture effectively forward.  The undermining behaviours in the above paragraph don’t make sense, given their goal.  However, they make perfect sense from the other probably unconscious perspective of safety or self-protection.  This is why they continue with these behaviours which act like keeping a foot on the brake while they talk about their foot on the gas.

At this point my question for them is…. 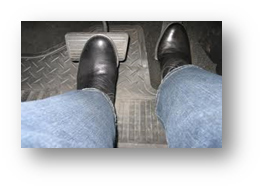 “What if you did the opposite of all those contrary behaviours, what would you worry about?

I don’t mean “noble” worries, but worries that really feel like they come out of a threat to your identity.  Worries that make you feel yucky, and at some level, and may not make any rational sense.”

“Do you mean, if I didn’t do the work, that my reports should or could do, and I didn’t tell them how I wanted it done?  But rather instead, I just set the context, described the outcomes I wanted, and trusted them to determine their own way to do the work. Additionally I was there to play the leadership role of supporting them to solve many of their own problems together, etc.?”

“Yes, this is exactly what I mean”.

“Well, I guess I would worry about the work not being done to my or my boss’s standards.   I would also be forced to confront inadequate performance, with the subsequent difficult performance management conversations.  I might likely also be embarrassed in front of my peers because shoddy work came out of my area.  I would also worry about others perceiving me as lazy or not being seen as strong and in full control of my group.”

“Well, if the beliefs and assumptions driving your “worries” were all true, then your micro-management behaviours all make perfect sense, don’t they?”

Releasing the Foot on the Brake

First off, the executive needs to acknowledge those worries or anxieties; and discover that he has a hidden foot on the brake.  This safety mechanism is in conflict with his purpose, or progress on his improvement goal, or his foot on the gas.

To stop making sense requires having the courage to do the work of uncovering and admitting to the worries, and testing the beliefs and assumptions behind the worries, for accuracy.  In other words, actually testing whether really bad things happen if you delegate more appropriately.  For example, if I discover I have a hidden belief or assumption that goes like this… “If I trust my employees to work on their accountabilities using their best judgement, they will likely do an inferior job to me, and I will be embarrassed and marginalized as a weak and ineffective leader”.   If in the testing process, he discovers that his beliefs and assumptions aren’t totally accurate, then his undermining self-protective behaviours no longer make sense.

Until we can create some distance from and objectify these worries driven by our hidden beliefs and big assumptions we will continue to be held hostage to those beliefs and maintain a hidden foot on the brake, while we espouse a foot on the gas.  We need to stop making sense, from this personal safety perspective, in order to choose and make real progress on our goals.